Kurt Vonnegut, the satirical novelist who captured the absurdity of war and questioned the advances of science in darkly humorous works such as “Slaughterhouse-Five” and “Cat’s Cradle,” died Wednesday.

A little off track for Citizen Will but I consumed more than my generation’s share of Vonnegut at quite an early age. 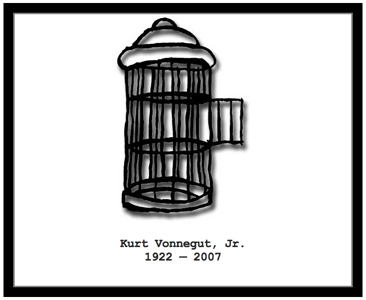 Like the twisted worlds of Philip K. Dick, Vonnegut’s works exposed me to the 60’s counter-revolution from a non-authoritative, outside the mainstream media, perspective.

I still vividly recall the Mar. 13th, 1972 PBS showing of Prometheus 5, a truly bizarre, disturbing and, at points, scary pastiche of Vonnegut’s earlier works. Particularly upsetting were the worlds of “Harrison Bergeron” and “Welcome to the Monkey House”.

The world of “Harrison Bergeron” features a shotgun-toting Handicapper General enforcing the law of the lowest common denominator – a false equality regulated by equipping all citizens with artificial “handicaps”.

In the over-populated world of “Welcome to the Monkey House”, the chemically sexually numbed citizenry is encouraged to visit their local Federal Ethical Suicide Parlors and “ethically” remove their small burden on the teetering ecology. Provocative, and in some ways, visionary.

Hard to believe PBS ever showed such strongly dystopian material.

With Vonnegut’s passing, we also lose one of the few remaining iconoclastic American writers who served in World War II. Vonnegut, as a close observer of the Dresden fire bombing, knew the literal heat of war. The Vietnam mess sharpened his dystopian outlook. I wonder if our current mess in Iraq will sharpen the dystopian pens of writers yet to come?